Over the past 40 years, more rigorous scientific research has been performed quantifying the risk posed by radon than for almost any other carcinogen. Findings from cohort studies of radon-exposed underground miners and direct evidence from case-control studies of individuals exposed to radon in their homes have clearly demonstrated that radon is a major cause of cancer mortality in the United States. In fact, the North American and European pooled residential case-control studies have reported a statistically significant increased risk from protracted radon (decay product) exposure below the U.S. Environmental Protection Agency’s (EPA) Radon Action Level of 4 pCi/L.

Even though there is overwhelming scientific evidence that protracted radon decay product exposure is a serious health threat, even at lower concentrations, the Occupational Safety and Health Administration’s (OSHA) Ionizing Radiation Standard for radon has remained unchanged since 1971 with the enforceable regulation dating back to the 1969 Atomic Energy Commission (AEC) regulation (Appendix B to 10 CFR Part 20). The OSHA radon exposure limit for adult employees is 100 pCi/L averaged over a 40-hour workweek [29 CFR 1910.1096(c)(1); 29 CFR 1926.53], which would result in a cumulative radon decay product exposure of 12 WLM/yr (assuming 100% radon decay product equilibrium) if the worker was exposed at this concentration for one working year (i.e., 2,000 hours).

Unlike federal Mine Safety and Health Administration (MSHA), Nuclear Regulatory Commission (NRC), and Department of Energy (DOE) radon regulations that cover specific workers in the nuclear industry, OSHA regulations cover most private sector employers in all the states, the District of Columbia, as well as other U.S. jurisdictions either directly through Federal OSHA or by an OSHA-approved state plan (Table 1).  The potential for elevated radon exposure can occur in a variety of occupations and worksites (Table 2). However, the largest occupational workforce, not associated with the nuclear industry, at risk from radon exposure are individuals with incidental exposure at a typical workplace (e.g., office, store, etc.). Most of these worksites are covered by the Occupational Safety and Health Administration (OSHA).

As far back as 1987, the National Institute of Occupational Safety and Health (NIOSH) recommended lowering the permissible exposure limit (PEL) for occupational radon exposure for miners from 4 WLM/yr to 1 WLM/yr while acknowledging that exposures to 1 WLM per year over a 30-year working lifetime posed substantial health risks. Dr. J. Donald Millar, NIOSH Director and Assistant Surgeon General, indicated that although NIOSH was recommending lowering of the PEL to 1 WLM/yr for radon decay product exposure, the recommendation likely does not satisfy NIOSH’s commitment to protect the health of the nation’s miners. Dr. Millar concluded that, “if new information demonstrates that a lower exposure limit constitutes both prudent public health and a feasible engineering policy, NIOSH will revise its recommended standard” (https://www.cdc.gov/niosh/docs/88-101/88-101.pdf?id=10.26616/NIOSHPUB88101).

We now know that subsequent miner-based studies have provided compelling evidence that a PEL of 1 WLM/yr, even if promulgated, would fail to provide an acceptable health-based limit to protect workers who have long term exposure to the PEL. Unfortunately, NIOSH’s recommendation to substantially reduce the radon standard has not been adopted as an enforceable standard by MSHA, NRC, DOE, and certainly not by OSHA.  In fact, the OSHA Radon Standard is the least restrictive published National occupational standard globally. For example, the OSHA Radon Standard is approximately 12 times less restrictive than the occupational radon reference level 300 Bq/m3  (8.1 pCi/L) adopted by the European Union and recommended by the International Council for Radiation Protection (ICRP) and National Council of Radiation Protection (NCRP).

In June 2020, the American Lung Association, the American Association of Radon Scientists and Technologists, the AARST Consortium on Radon Standards, Cancer Survivors against Radon, Citizens for Radioactive Radon Reduction, and the Conference of Radiation Control Program Directors wrote a joint letter to the U.S. Secretary of Labor respectfully requesting that a revised rule and/or supplemental rule be promulgated since the existing rule is 1) insufficiently protective of individuals employed in those workplaces that have some risk associated with radioactive materials because the employer possesses, uses, or transfers radioactive material in the conduct of business, and 2) not relevant to individuals employed in everyday workplaces such as schools, stores, and offices where the employer does not possess, use, or transfer radioactive material in the conduct of business. To date, no response has been received from the Department of Labor regarding the groups’ request. Please share your experiences regarding the OSHA radon regulations on the AARST Radon Forum – https://www.radonlistserv.org/categories/all. 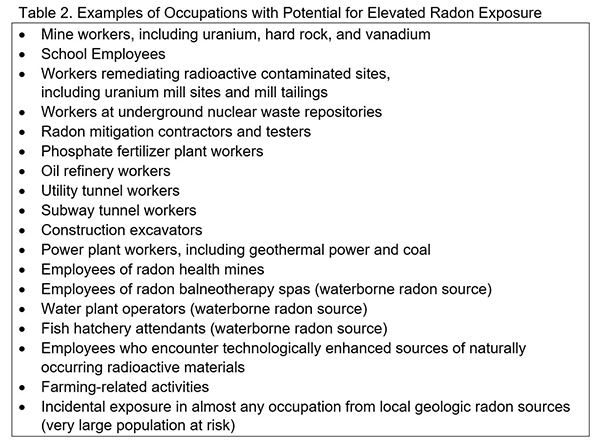